KENNESAW, Ga. (May 27, 2021) — Janet Arras is the first full-time postdoctoral research scientist to work in the Department of Chemistry and Biochemistry in Kennesaw State University’s College of Science and Mathematics. With expertise in synthetic inorganic chemistry, crystallography, and computational chemistry, Arras works in the laboratory of Michael Stollenz, assistant professor of organometallic and inorganic chemistry. 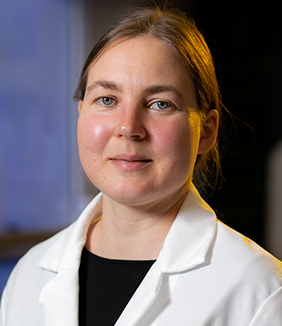 “After making international conference presentations in Germany, I received two informal applications,” said Stollenz. “I was extremely grateful when Dr. Janet Arras accepted the position in January 2019. Her extensive experiences in synthetic chemistry and her additional training as a computational chemist are tremendous assets to our research team, and in this combination, unique in our department.”

Postdoctoral work is a common step for aspiring researchers following the receipt of their advanced degrees in their fields of study. It allows Ph.D. recipients to continue their training while also building the necessary research experience for thriving in their future academic or industry careers.

Born in Tübingen and grown up close to Stuttgart Metropolitan Area, Germany, Arras received her Diplom—the German equivalent of a Master of Science degree—from Eberhard Karls University of Tübingen. She then continued her graduate studies at the same institution, receiving a doctorate in inorganic synthesis and coordination chemistry, focusing on main group elements and late transition metal complexes. Examples of transition metals include copper, gold, rhodium and palladium.

In the two years that Arras has spent at KSU, she has already made significant discoveries of brand new compounds in her research that have the potential to lead to a new generation of OLED (organic light-emitting diodes) materials for applications in flat screens and other electronic devices. Stollenz said he is amazed at her skill when obtaining experimental results, which are supported by her sophisticated computational studies.

“Her discovery is something which requires synthetic skills on a very high level, as the compounds are extremely sensitive to moisture and air,” he said. “To handle such compounds is not possible for an undergraduate, or even graduate student. She was clearly well prepared at her graduate institution.”

Arras has published two peer-reviewed journal articles as a co-author in the Stollenz group and three additional manuscripts are currently in progress. She has also participated in several local, regional, national, and international conferences, including the spring American Chemical Society National Meetings in 2019 and 2021 as well as the Southeastern Regional Meeting in 2019, and the first international online conference in inorganic chemistry in 2020, hosted by the German Chemical Society.

Stollenz also noted that having a postdoctoral researcher in his lab, among undergraduate and graduate students, fills the gap between graduate and professional-level work at a university.

“Working with postdoctoral researchers is beneficial for all involved,” he said. “Dr. Arras is constantly working with a team of at least one graduate student and two undergraduates on our research projects while serving in the role of the head laboratory manager.”

After her time as a postdoctoral researcher at KSU is completed, Arras hopes to apply for a variety of international research positions. She is driven by a passion in her research that will allow her to persevere in a time when the job market has been weakened by the COVID-19 pandemic.

“Ideally, I would like to work in a permanent position at a university, where I will continue to teach while conducting research,” Arras said. “For me, teaching and researching is always connected. To be an effective researcher, it is critical that you pass on your knowledge and mentor the next generation of scientists.”