The Office of Undergraduate Research at Kennesaw State University hosted the Fall Symposium of Student Scholars on Thursday, November 17, both in-person on the Marietta campus and virtually via Microsoft Teams.

Here’s a look at a few research projects from the event.

Veteran Suicide in the U.S.

At one point, the nationwide suicide rate for veterans was reported to be 22 every single day.

Carson Merritt’s project aimed to show the suicide rate by state, then compare that data to Veterans Affair locations.

“It’s just something that I’m passionate about,” Merritt said. “I’ve had friends who have dealt with suicide attempts and stuff like that. I’m big on supporting veterans. All in all, veteran suicide is a topic I’m passionate about, so I figured it would be good to do a project on it.”

Merritt gathered data from ArcGIS online, a web-based mapping software that dotted results across the country.

“Some of the states that have lower populations, like up there in the Midwest, actually had higher rates, and I don’t know if that’s because the population is so low,” Merritt said. “The majority of the states with the really high rates went with there being less VA locations.” 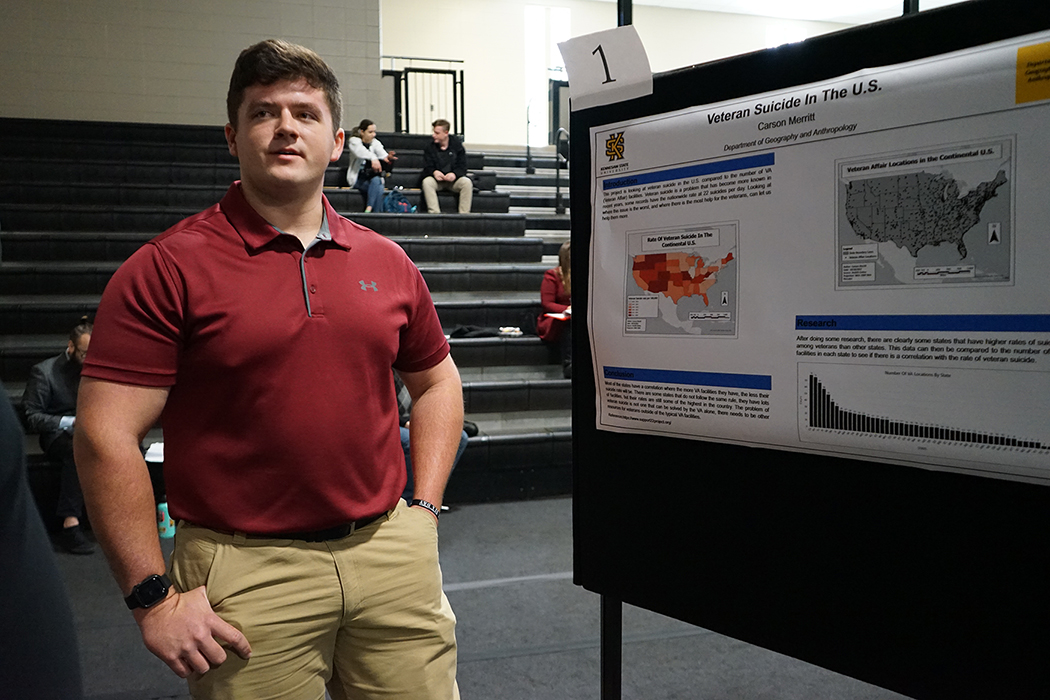 Stretching to Reduce Chronic Back Pain in Nurses & Care Partners

Many nurses and care partners develop job-related chronic lower back pain due to constantly repositioning immobile patients, changing linens, and bathing patients. These strenuous job requirements involve bending and lifting, as well as standing for extended periods of time during long shifts.

Jennifer Monyhan’s proposal investigates the effectiveness of a targeted, 30-second stretching session incorporated into each shift change huddle, for employees beginning their shift as well as employees ending their shift, on reports of lower back pain.

“In my previous career I worked for UPS, and I was out in operations where all the truck drivers are,” Monyhan said. “Every morning, we’d have our little huddle like the nurses do and we would do a quick stretching exercise — every single morning for 30, 45 seconds to get them ready to move those packages.”

“So, I figured we have a captive audience in the huddle with the nurses and the care partners, so why don’t we incorporate a quick stretch?”

To ensure accurate results, Monyhan will focus on care partners and nurses who report lower back pain and will provide a pre-determined list of targeted exercises to be performed on an identified medsurg/telemetry unit during each shift huddle.

Afterward, Monyhan will interview participants and ask them to rate their back pain on a 10-point pain scale, then compare those results to the answers provided at the beginning of the study. 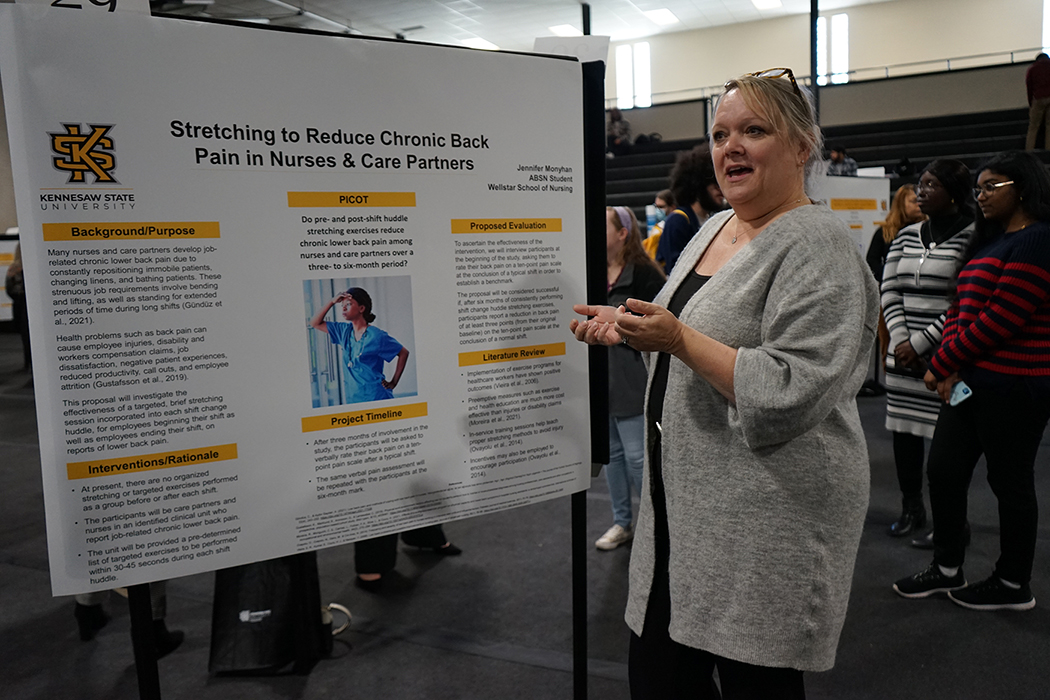 Populations of aerially insectivorous birds are declining throughout North America.

Urbanization may indirectly contribute to this decline through its negative effects on populations of insects, an important food source in insectivores' diets, where low insect availability may be especially challenging for birds during breeding. 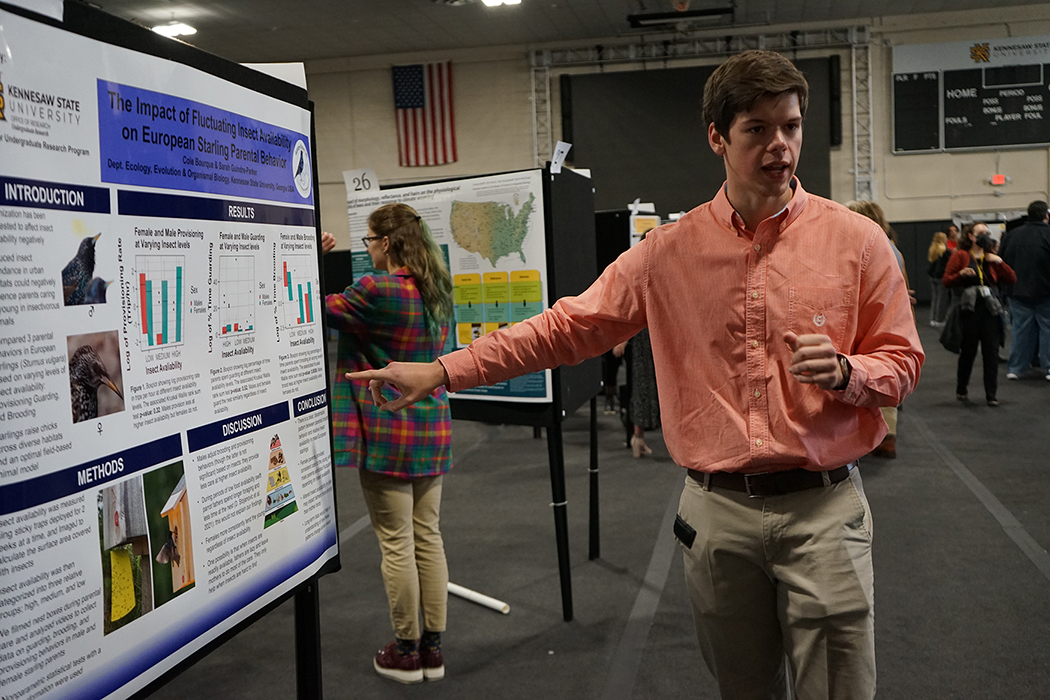 Past research found an increase in male eating disorders in the recent years, and this project wanted to see if there were implications in male athletes.

Caitlin Callahan and Abby Doster used a dataset from the National Library of Medicine that collected information from athletes 18 years old and above, measuring restraint, eating concern, weight concern and shape concern.

“We initially thought, ‘OK, the stereotype is females and eating disorders. Those two pair together all the time,’ Doster said. “Especially in lean sports like ballerinas, they are pressured to lose weight, but it was so surprising at first when we did the t-test, we found that males were significantly higher in the eating disorder global score.”

Their research found that male athletes scored significantly higher that female athletes in all subcategories of the Eating Disorder Examination Questionnaire (EDE-Q). They also found that when looking at the interaction of gender and sport type, male athletes in non-lean sports scored higher in shape concern and eating concern. 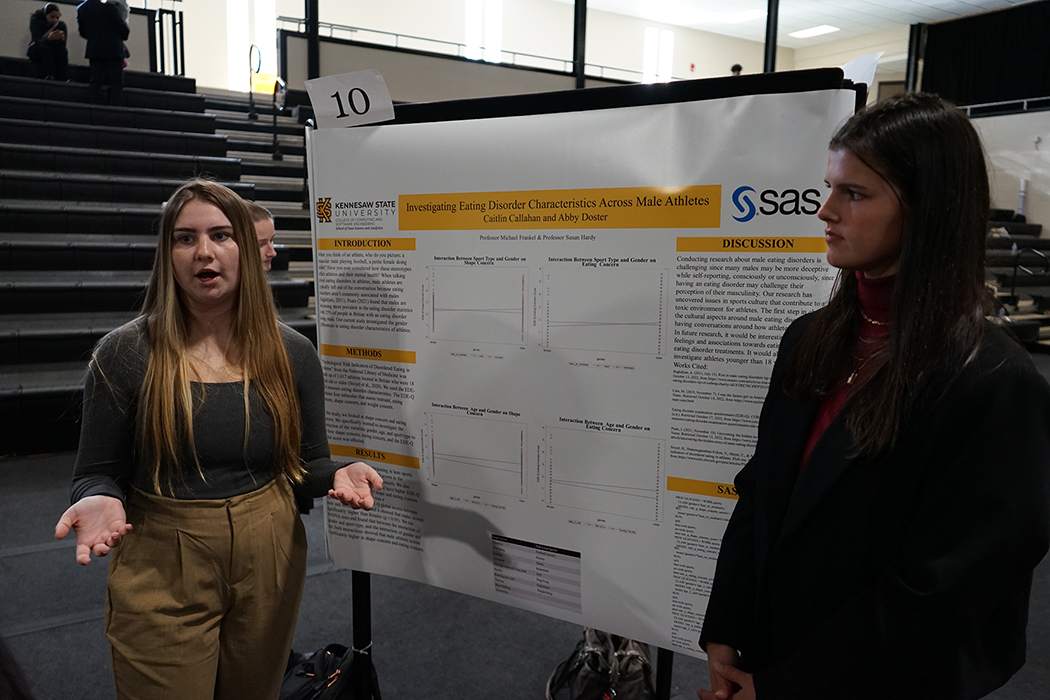 Cathodically coloring electrochromes have been primarily used for organic electronic applications in anti-glare mirrors and windows, smart windows, and smart sunglasses. However, in practice, these materials have a residual red-light absorbance leaving a blue tint in the films.

Anodically coloring electrochromes (ACE) provide a solution to this problem because they are colorless in the neutral state, and upon oxidation are colored.

“Anodically coloring electrochromes are ones that start off colorless, and when you apply the potential, they become colorful,” Julia A. Mauro said. “So, like a smart window, that’s what the remote is: You press the button and it applies the potential and the molecules in the glass change its color and it darkens.” 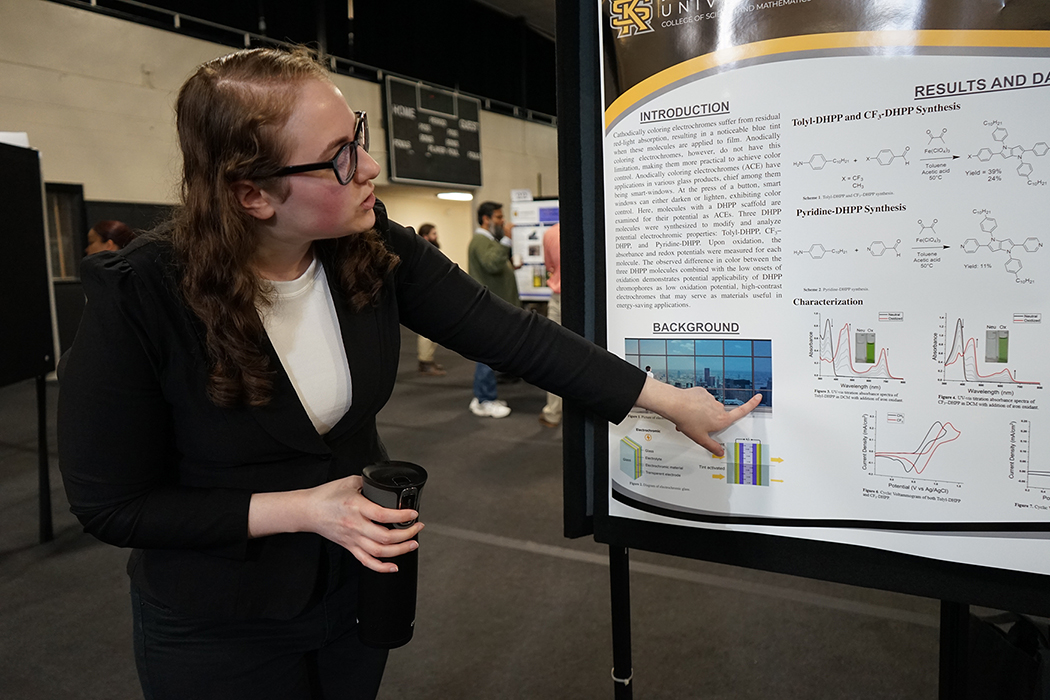 The Effect of Gaming on Novice Pilots

Global aviation is suffering pilot shortage, and by 2032, it is expected that international aviation will be 80,000 pilots short.

Researchers have found that gaming positively impacts cognition and hand coordination. Specifically, the abilities of people with expertise levels in video gaming have significantly improved performance scores in many flight simulators.

“We are currently doing the data collection right now,” Tristian McMichael said. “So, we’ve had a whole bunch of students come in and we’ve set them up with the flight simulator and run them through the basic process of what’s going on. We collect data based on their flight, then once we have all of these different students’ data in, then we will be crunching the numbers and have final results.”

Results will help determine whether there are statistically significant differences in how people with expertise levels in video gaming and people without this experience learn to fly the aircraft. 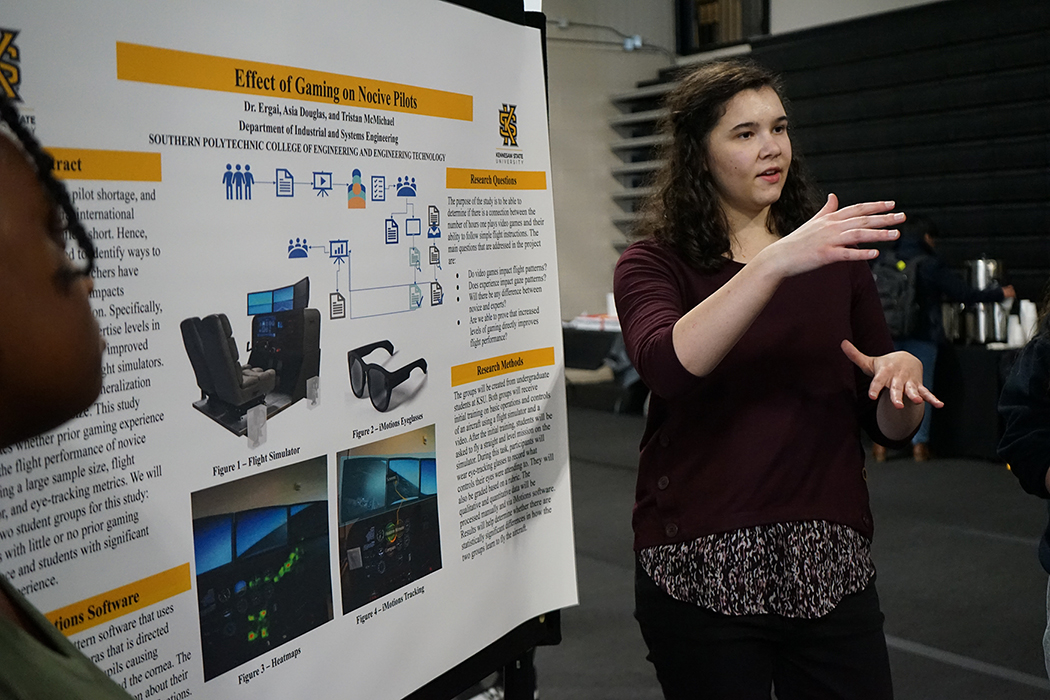 How to Run with a Big Head

As animals begin to grow, they usually do not maintain a one-to-one ratio between their different body lengths and widths.

Humans, for example, have large heads proportional to their body size as infants, but as we grow up our bodies grow while our heads become smaller proportionately to our bodies.

Ants differ in this, as an ant gets bigger, so does its head.

“What we found is that the larger heads on these ants actually handicap their velocity,” Griffith-Tesch said. “They run at a much slower speed than you’d expect them to run. But what we found is that they’re more weight efficient, meaning that they are able to pick things up, such as seeds or food, and they’re able to get going a lot faster than the other ants that are smaller.” 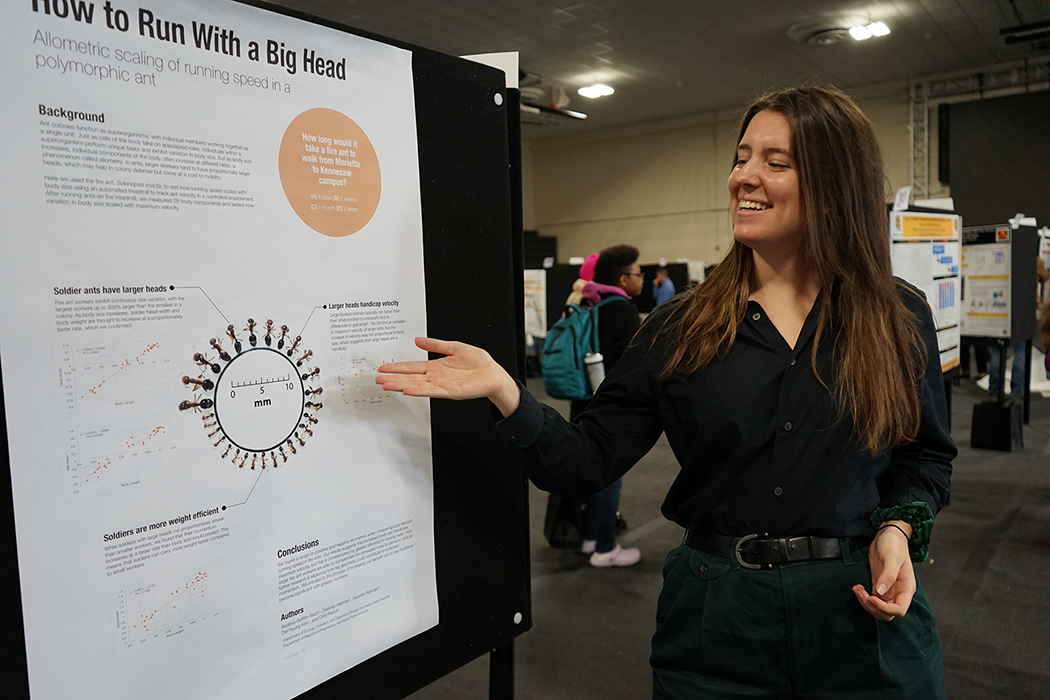