KENNESAW, Ga. (Oct. 11, 2018) – With offices right across from each other at Kennesaw State University, Nikolaos Kidonakis and Marco Guzzi can easily discuss and collaborate when tackling fundamental questions of the universe.

Now the two theoretical particle physicists have even more in common as each has been recently awarded a National Science Foundation grant within a week’s time. The grants fund their individual projects to improve theoretical predictions in particle production experiments conducted at the Large Hadron Collider (LHC). Considered the world’s largest and most powerful particle accelerator, the LHC is located at CERN (European Organization for Nuclear Research) near Geneva, Switzerland.

Kidonakis, professor of physics at KSU since 2004, received a three-year $180,000 award, focused on developing newer systems of formulas to advance more accurate theoretical predictions of various processes involving elementary particles, such as top quarks and Higgs boson, and in models of new physics.

“The study of the top quark and the Higgs boson are central areas of elementary particle physics and its exploration at the LHC,” said Kidonakis. “My theoretical calculations provide state-of-the-art predictions for processes involving these particles, and they have been widely used and cited. I have been funded by the NSF since 2006, and this is my fifth consecutive NSF grant in particle theory at KSU.”

Guzzi, who joined KSU last year as assistant professor of theoretical particle physics, garnered a $108,830 grant over a three-year period. His research is focused on not only to improve the current knowledge of the distribution of quarks and gluons, the building blocks of matter, in a proton, but also enhance the theory predictions to search for new physics interactions.

“Being one of the few physicists active in theoretical high energy physics and collider phenomenology in Georgia and the Southeast, and being awarded my first NSF grant, encourages and motivates me to continue to put efforts in this direction,” said Guzzi.

“Moreover, it is strategic to the development of a larger theoretical high energy physics group at KSU, including students and other faculty members, with the long-term goal of having master’s and Ph.D. programs that will embrace high energy theoretical physics related to the LHC. This machine will be playing a major role in science and technology for at least the next two decades,” he added.

Although they are at different points in their careers, the two researchers share similar traits of scientific curiosity and self-motivation that fueled their professional goals.

Originally from Thessaloniki, Greece, Kidonakis has always been intrigued about the universe and elements of nature. With interests in physics and mathematics, he decided to attend college in the U.S. and graduated from 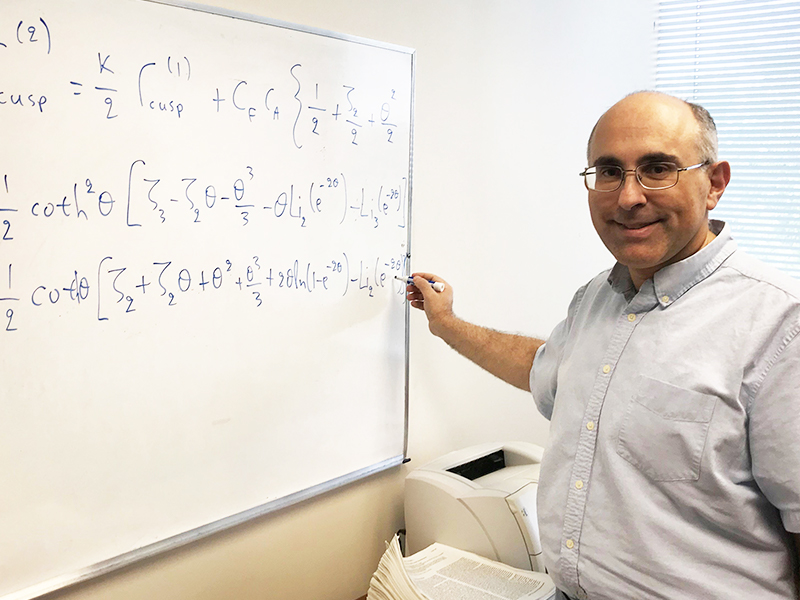 his top choice, the California Institute of Technology in 1990 with a bachelor’s degree. A year later, he finished his master’s degree at the University of Cambridge.

While completing his doctorate at the State University of New York at Stony Brook, Kidonakis said he remembers his first published paper set him on the trajectory of his current research interests.

“My first paper on the top quark was submitted in January 1995 before the announcement in March of that year of the discovery of the top quark. So when my paper was published in June, we had to add a note at the end of the paper about the recent discovery. This was a very exciting time,” explained Kidonakis.

For the last 25 years, Kidonakis’ work has been utilized by experimental physicists in particle accelerator labs, including the LHC and Tevatron, a now inactive collider located at the Fermi National Accelerator Laboratory in Illinois. Another important discovery made headlines in 2012 when his calculations and the work of others were used to find the Higgs boson at the LHC. The Higgs boson, a particle that is believed to give mass to other particles, had been a physics mystery since it was first proposed in the 1960s.

“The study of the top quark, which is the heaviest known elementary particle, and of the Higgs boson are closely related and are crucial for understanding the Standard Model of particle physics and in the search for new physics,” said Kidonakis.

Guzzi, whose hometown is Brindisi, Italy, also asked many scientific questions growing up, and was influenced 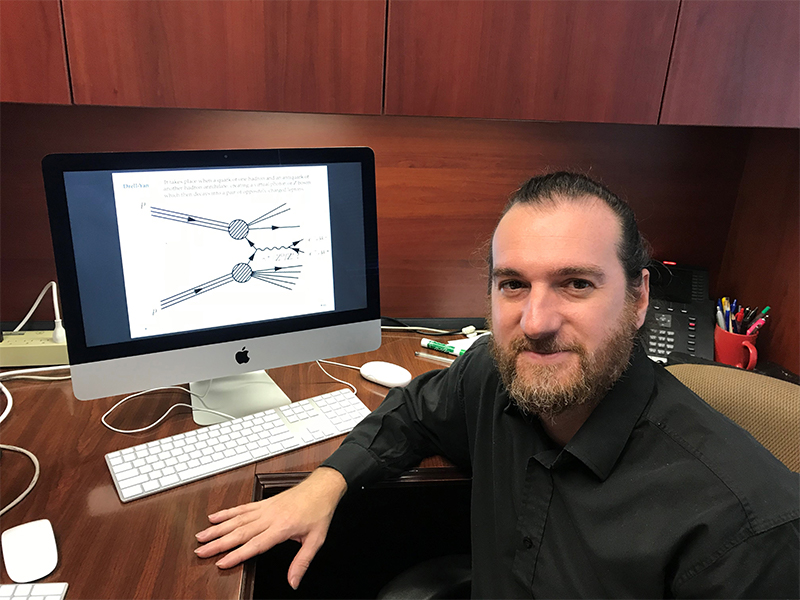 by the work of Albert Einstein and the impact of his discoveries in physics.  As a result, he earned a master’s degree in theoretical physics from the University of Salento in Lecce, Italy in 2002 and continued to pursue his Ph.D., which he received in 2006.

“The beauty of theoretical physics is that it is a highly creative discipline. It combines abstractions and knowledge of mathematics, and at this day and age, also of computer programming, to rationalize and predict phenomena in nature,” said Guzzi.

For the next decade, Guzzi conducted theoretical physics research through postdoctoral research fellowships around the world. He has worked in the U.S., the United Kingdom, and Germany where he was an affiliated theoretical physicist of one of the LHC experimental groups (CMS) based in Hamburg. In addition, he was a recipient of a two-year INFN Fellowship at his alma mater, a prestigious internationally recognized fellowship awarded by Italy’s National Institute of Nuclear Physics.

“Investigating the structure of the proton is challenging but exciting at the same time. On one hand, it takes a lot of efforts to analyze high-precision experimental data from particle collisions and compare them to equally precise theory predictions,” said Guzzi. “On the other, the reward is huge because you have the opportunity to really see how fundamental interactions of nature work. That’s the path to new discoveries. I believe this is an exciting time to be a physicist, theorist or experimentalist.”