Click here to return to the Spring 2021 season archives.

Say It, Don't Spray It: Teaching with Face Masks 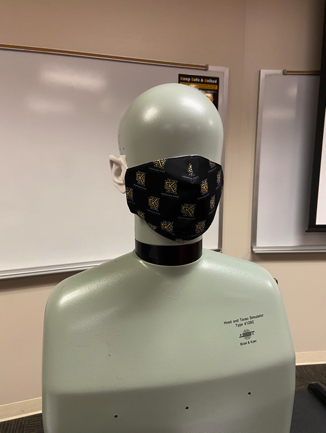 of electrical engineering, were the featured faculty from the Southern Polytechnic College of Engineering and Engineering Technology at KSU.

This interdisiplinary team discussed its investigation of the acoustic and speech transmissibility effects of the face masks and shields that must be worn during the COVID-19 pandemic. Experiments were conducted in a classroom environment using an acoustic head and torso simulator wearing a variety of face coverings. Acoustic data were compared to reported mask droplet transmission rates.

Learn more about the researchers!

The Ruhalas were two of the founding faculty members for the mechanical engineering program when they joind Southern Polytechnic State University in 2010. The married couple both worked at General Motors for a number of years before pursuing their doctorates at The Pennsylania State University. She received a Ph.D. in Engineering Science and Mechanics, while he received a Ph.D. in Acoustics. They have collaborated on a number of projects focused on medical devices and the mechanics of football-related injuries.

Crimm joined Southern Polytechnic State University in 1997 after working for several years in the computer industry. He served for ten years as the founding department chair in electrical engineering when the program began in 2009. He earned his bachelor’s and master’s degrees in electrical engineering from Georgia Tech, and is licensed as a professional engineer in Georgia. Since playing a piano from a very young age, Crimm's research interests include the physics of music and acoustics, as well as studying music technology applications in electrical and computer engineering.