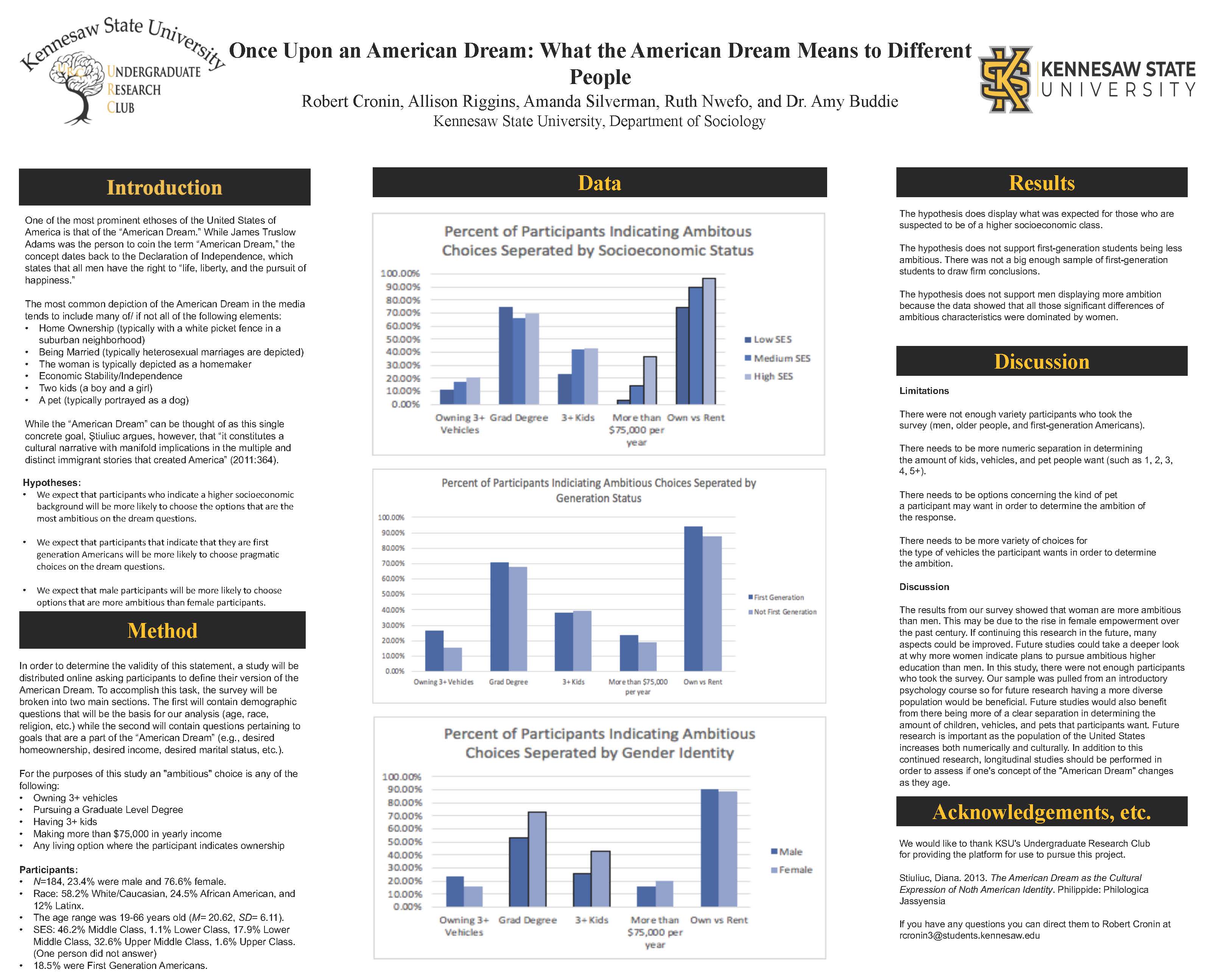 In this study, participants were asked to define their version of the "American Dream" (e.g., desired homeownership, desired income, desired marital status, etc.). We predicted that those from a higher socioeconomic background will be more ambitious with their ideal “American Dream” than those with poorer economic backgrounds. We also predicted that younger individuals will be more ambitious/optimistic with regard to their “American Dream” than older individuals. Finally, we expected that first-generation Americans will choose the more pragmatic options. The results of this study will add to the literature regarding the extent to which different groups of people endorse aspects of the American Dream.

Attitudes Toward Immigrants and Immigration Issues 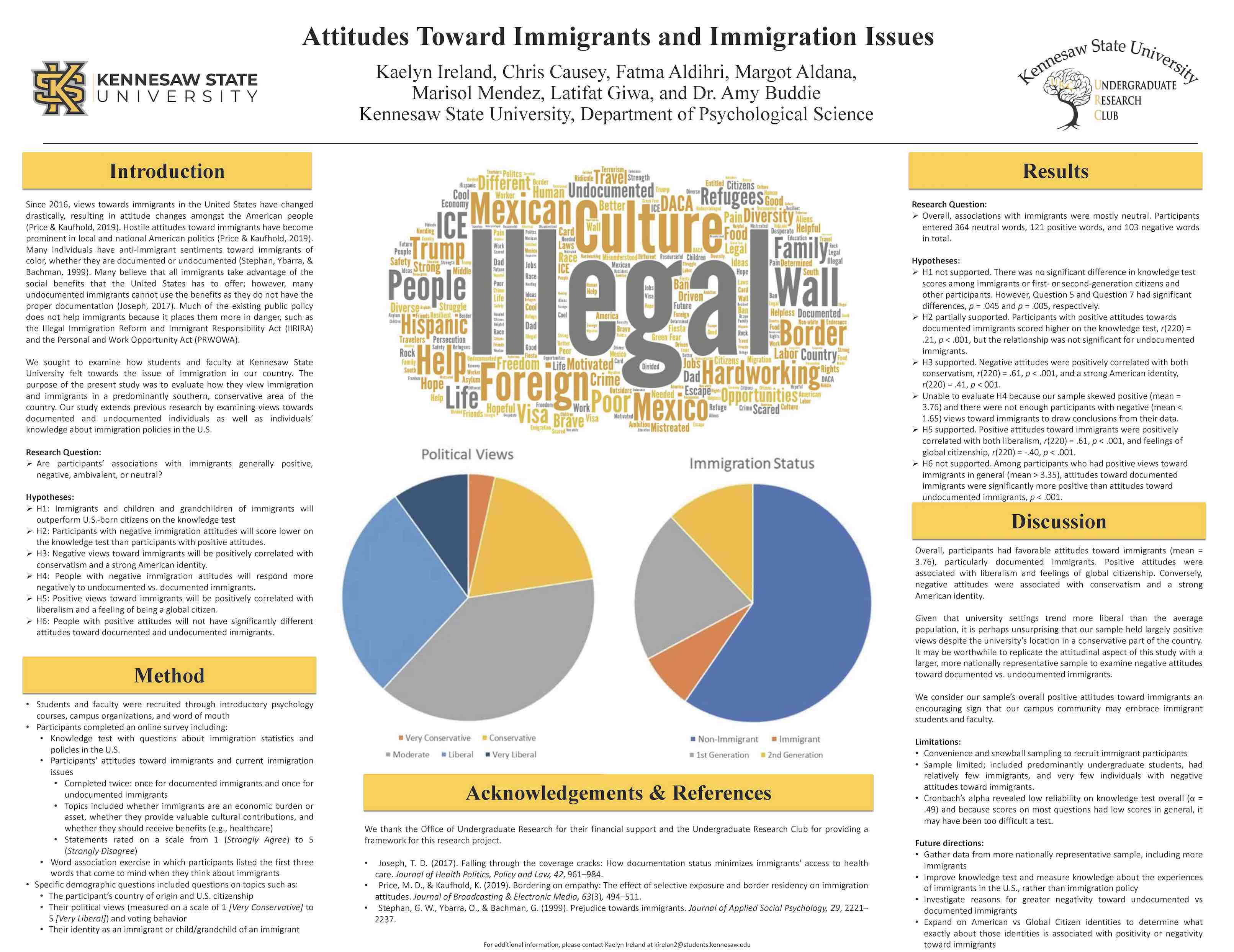 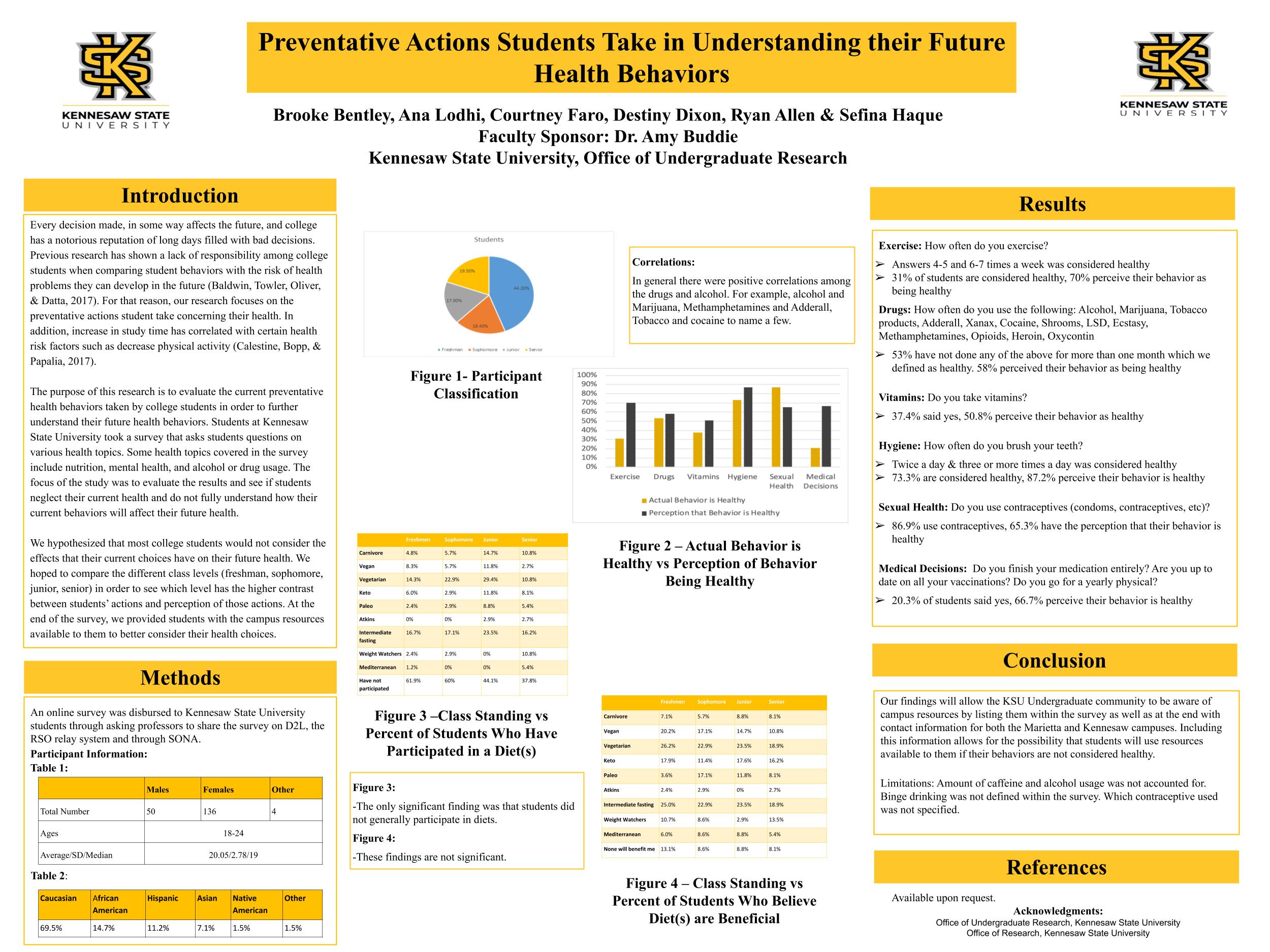 Previous research has shown a lack of responsibility among college students when comparing student behaviors with the risk of health problems they can develop in the future (Baldwin, Towler, Oliver, & Datta, 2017). The purpose of this research is to determine whether students actively make decisions toward the betterment of their health and whether they understand the future health ramifications of their current behaviors. In addition, the research presented will bring student insight towards campus resources available to them. Questions, via online survey, will be proposed to students at Kennesaw State University pertaining to health topics with the goal of providing college students with a list of resources to improve their overall health. At the end of the survey there will be a debriefing with resources pertaining to drug-related concerns, as well as psychological and health services. The questions in the survey will focus on various lifestyle topics such as alcohol consumption, drug usage/misuse, exercise, nutrition, mental health, doctor appointments, supplements, and hygiene. We anticipate that there will be a majority of students who neglect their current health and do not consider how their actions will affect their future. This information could help us educate the students at the university about the different resources available on campus to help them stay on track for a healthier future.

Attitudes Towards Recreational Drug Use: A Study of Kennesaw State University Students

Illicit substance usage has always formed a substantial controversy in society, with differing substances being utilized for a variety of purposes and contexts. Prior research has indicated that substances have been used for stress relief, attention enchancement, and the attainment of peer approval (Agarwal, Loukas, & Perry, 2018; Lui, 2019; Maahs, Weidner, & Smith, 2016). The main focus of this study is on collegiate students’ attitudes towards these drugs and the correlation of said attitudes with substance use. Recent research has indicated that attitudes of college students towards drugs may be changing (Vidourek, King, Merianos, Burbage, Oluwoye, 2018). Additionally, drug usage is significantly higher amongst American college-aged individuals than the wider adult population (SAMHSA, 2017). Other research found that college students react more positively to substance abuse treatment programs than their non-student counterparts. (Sahker, Acion, & Arndt, 2015) Therefore, it is essential to the success of these programs that they are equipped with the most accurate data concerning student usage of these drugs. In order to measure college students' attitudes, the Drug Attitudes Scale, or DAS, was employed (Goodstadt, Cook, Magid, & Gruson, 1978). A modified version was used, in order to update some of the language for modern times, focus on the specific drugs of interest, and to distinguish between nicotine usage via smoking cigarettes and vaping. Additionally, two questions were modified from the Moral Disengagement in Doping scale, in order to have questions relating to each drug that could be directly compared (Kavussanu, Hatzigeorgiadis, Elbe, & Ring, 2016). In addition to providing updated data on students' attitudes towards these drugs, usage of the modified DAS – coupled with the modified questions from the Moral Disengagement in Doping scale – could provide an updated, modern scale which can be used to measure these attitudes in a variety of contexts. 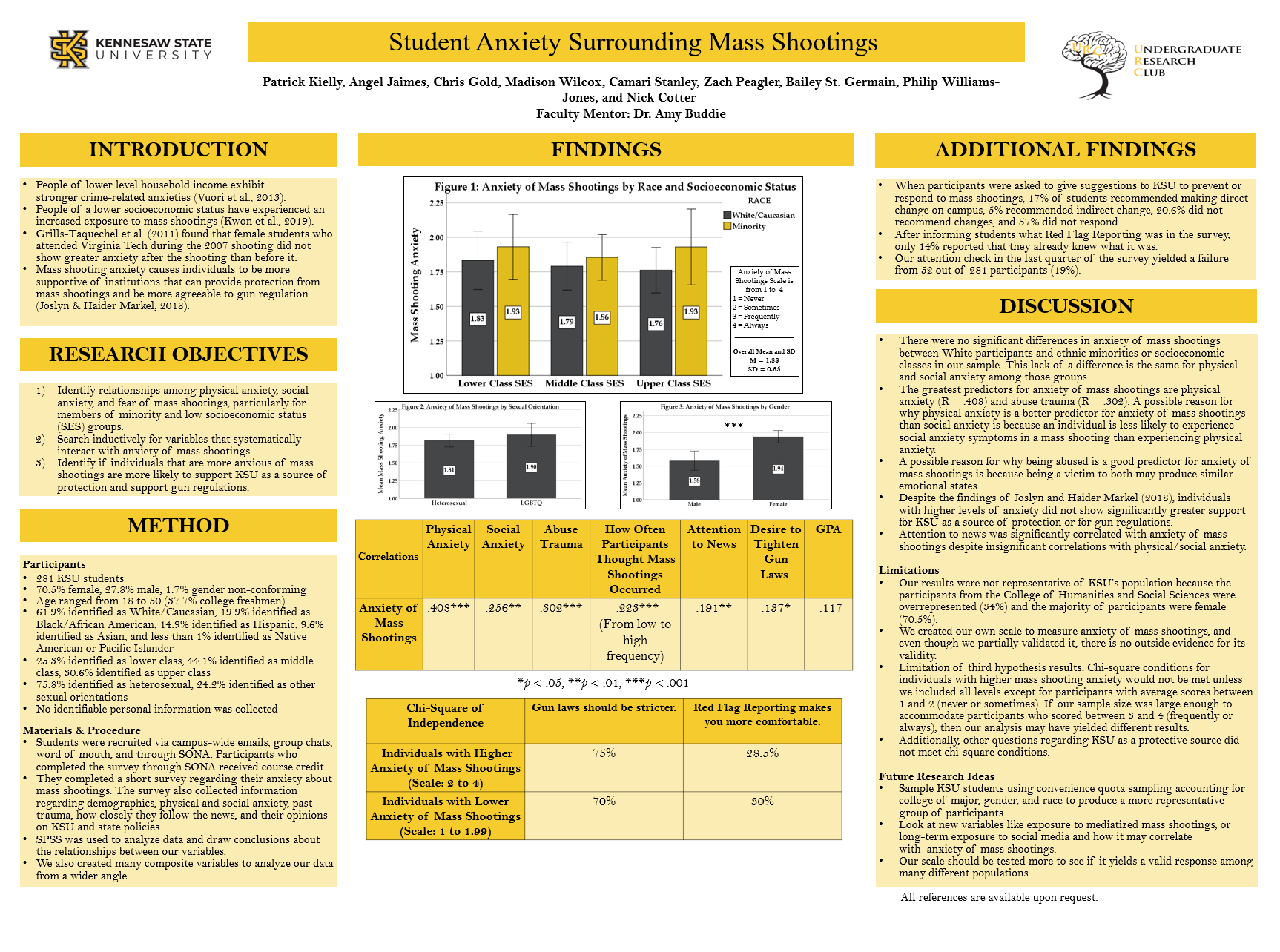