The Office of Undergraduate Reseach provides Kennesaw State undergraduate students with faculty-mentored opportunities to interact in all phases of the research process. Undergraduates develop their inquiry and analytical skills as they investigate topics in disciplines across campus which match their interests and career aspirations. Trae Dunn of Alpharetta is one of KSU's Talon'ted Undergraduate Researchers making the transformation from a consumer to a producer of knowledge.

KENNESAW, Ga. (June 30, 2020) — Dunn is a junior studying biology whose passion is to discover treatments and gain a molecular understanding of the genes that cause learning disabilities and neurodegenerative diseases, such as Alzheimer’s. To start his journey, the Honors student began to do research in Dr. Martin Hudson’s biology lab  in the College of Science and Mathematics during his first semester at KSU with no prior experience in biology. He started working as a volunteer for the experience and pure enjoyment. Later he began to expand his research at different programs, including spending last summer conducting research at the Massachusetts Institute of Technology (MIT).

Dunn has presented his research at the inaugural Posters at the Georgia State Capitol in spring 2019 and at the National Conference on Undergraduate Research (NCUR) which was held at KSU in April 2019.  He also received a scholarship to present at the Society for Advancement of Chicanos/Hispanics and Native Americans in Science (SACNAS) conference in Hawaii in fall 2019.  Lastly, Dunn was among thirty recipients to receive an award for his presentation at the 2019 Annual Biomedical Research Conference for Minority Students (ABRCMS) in the category of Developmental Biology and Genetics. In spring 2020, Dunn was the third KSU student to receive a Barry M. Goldwater Scholarship, which recognizes the nation’s top undergraduate scholars in the sciences, mathematics and engineering.

How did you feel when you received the news that you were named a 2020 Goldwater Scholar?

When I opened my decision email and realized I was named a Goldwater Scholar, I released a sigh of relief and was overjoyed to be recognized for the hard work I have put in throughout my college career. However, I have yet to fully celebrate my achievements as I have been working towards my final obstacle, the MCAT [Medical College Admission Test].

Please describe your research experience at KSU and MIT?

At KSU, Dr. Hudson pushed me to become independent immediately, which was helpful for my future. In his lab, I studied and compared genes, such as cnd-1, which has been associated with the development of type 2 diabetes in humans.

We did this research to get a better understanding of the big picture of how genes interact with each other to produce the results that we then see in humans. We wanted to know how these genetic diseases affect humans and the roles of the genes. In order to study these genes, we used small nematodes or worms known as C. elegans which are found in our soil. Nematodes have similar genes to humans, and they only have around 1,000 cells compared to our billions of cells, so it is more practical to use them in our research. 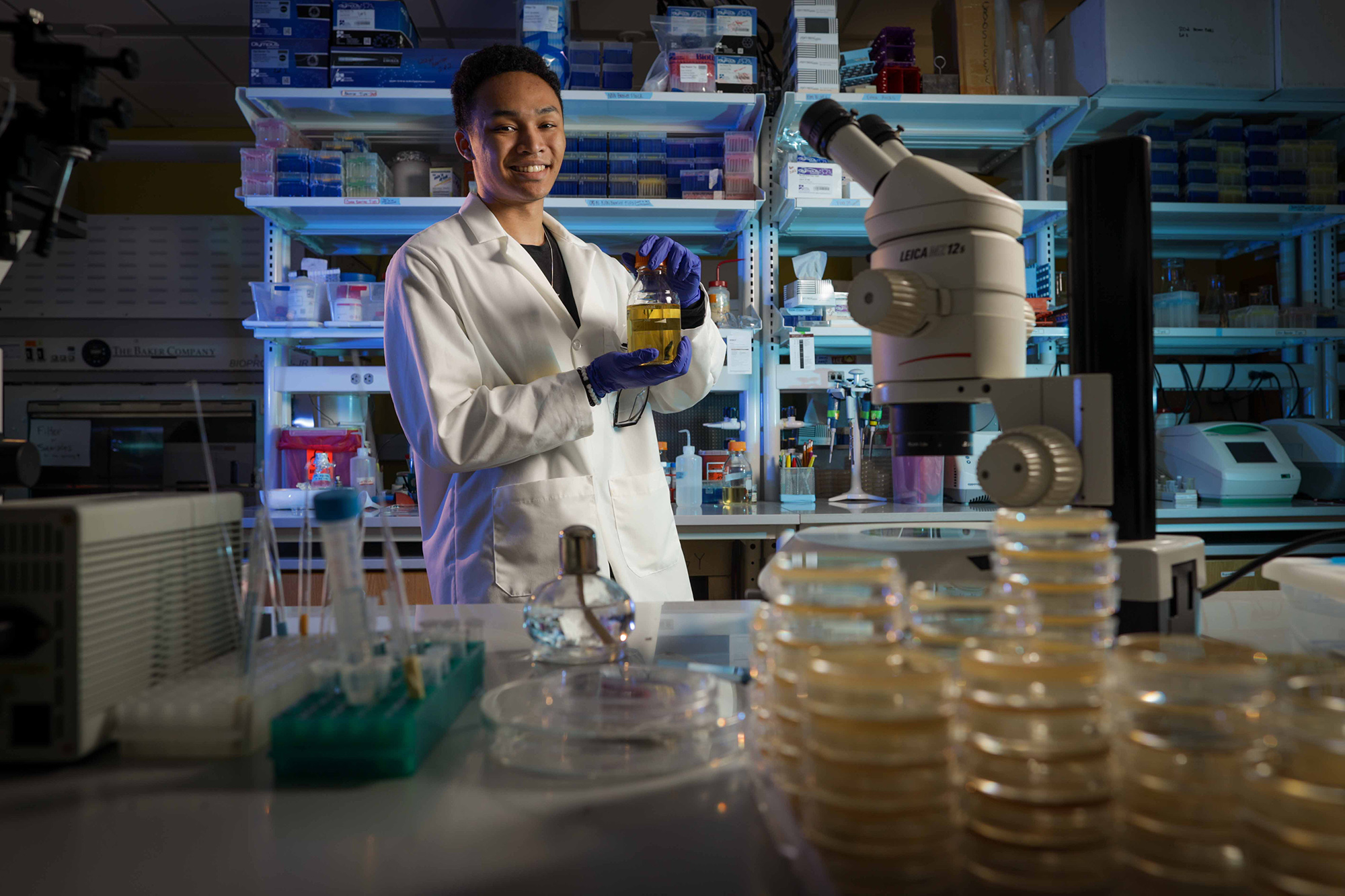 I was a part of MIT’s summer research program (MSRP) where I got to choose to work in Nobel Laureate Dr. Robert Horvitz’s lab under Dr. Kirk Burkhart. My main project was to use Dr. Burkhart’s research on the complex mutations of the gene H3.3 and find suppressors to reverse the phenotypes, which will give us a better understanding of the biological role and importance of these genes. During my time at MIT, it was important to me that I could be as independent as possible in the research, which allowed me to grow as a scientist. 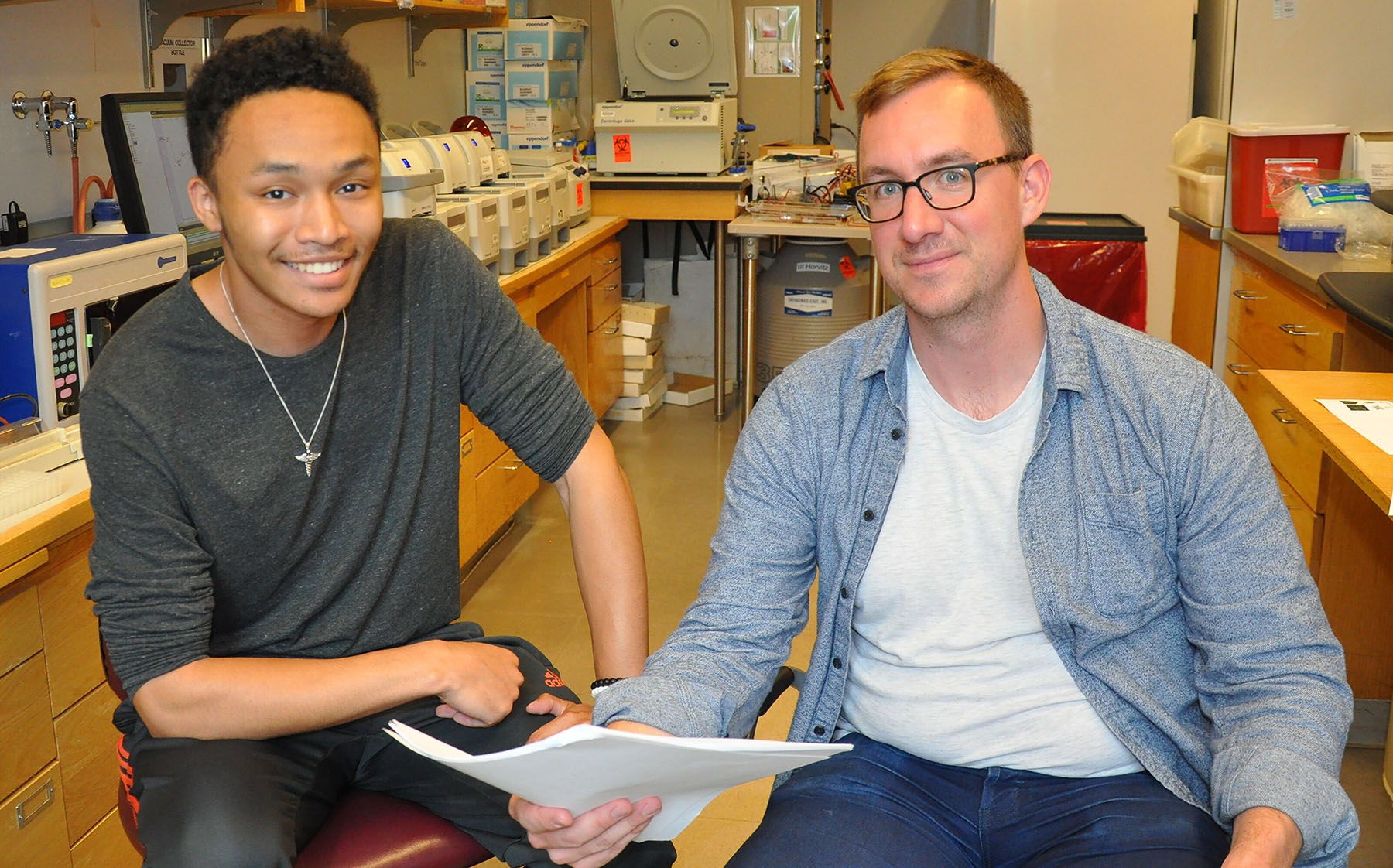 Trae with Dr. Kirk Burkhart, Postdoctoral Fellow in the Horvitz lab at MIT. 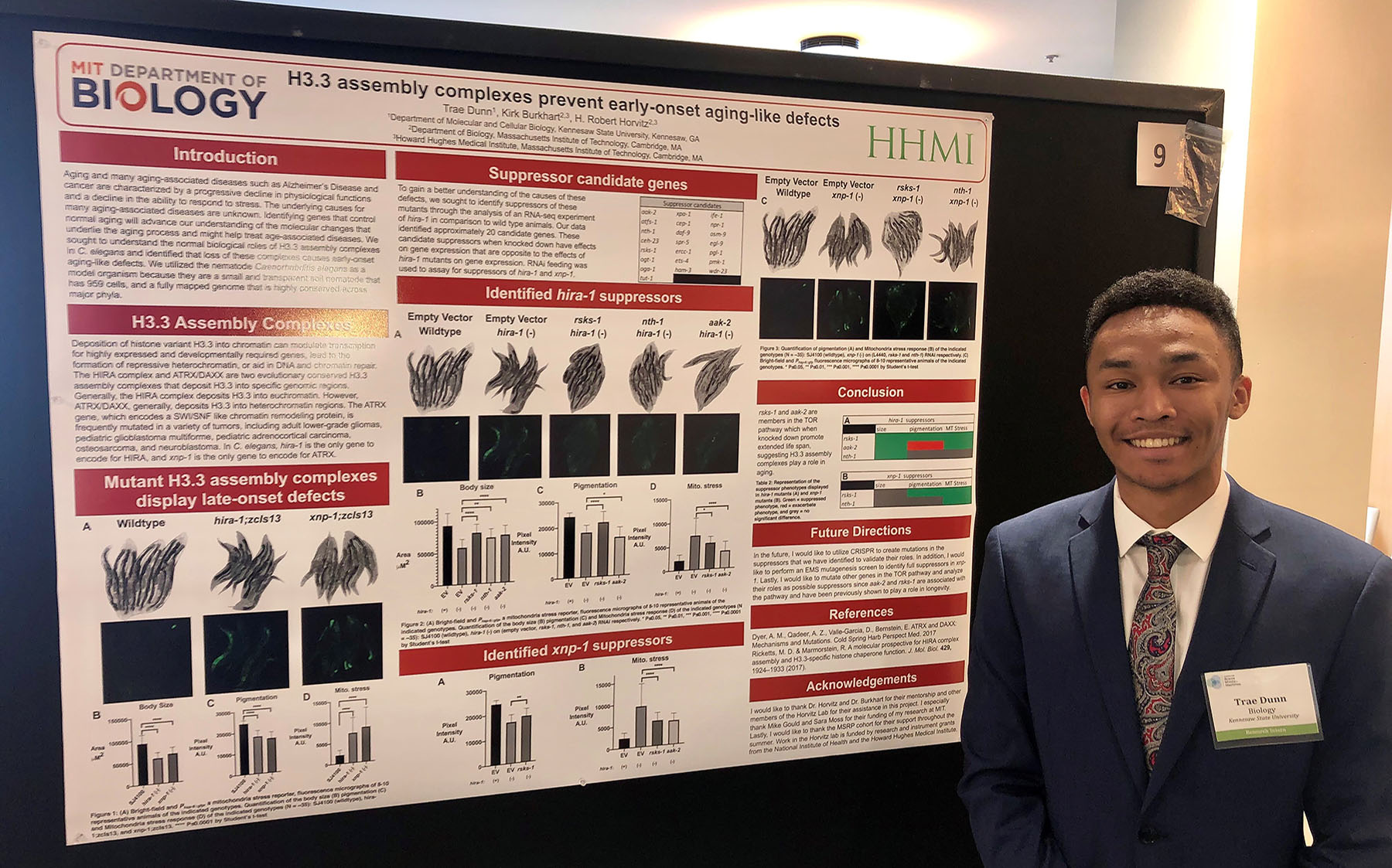 Trae presenting at MIT during the summer program in 2019. 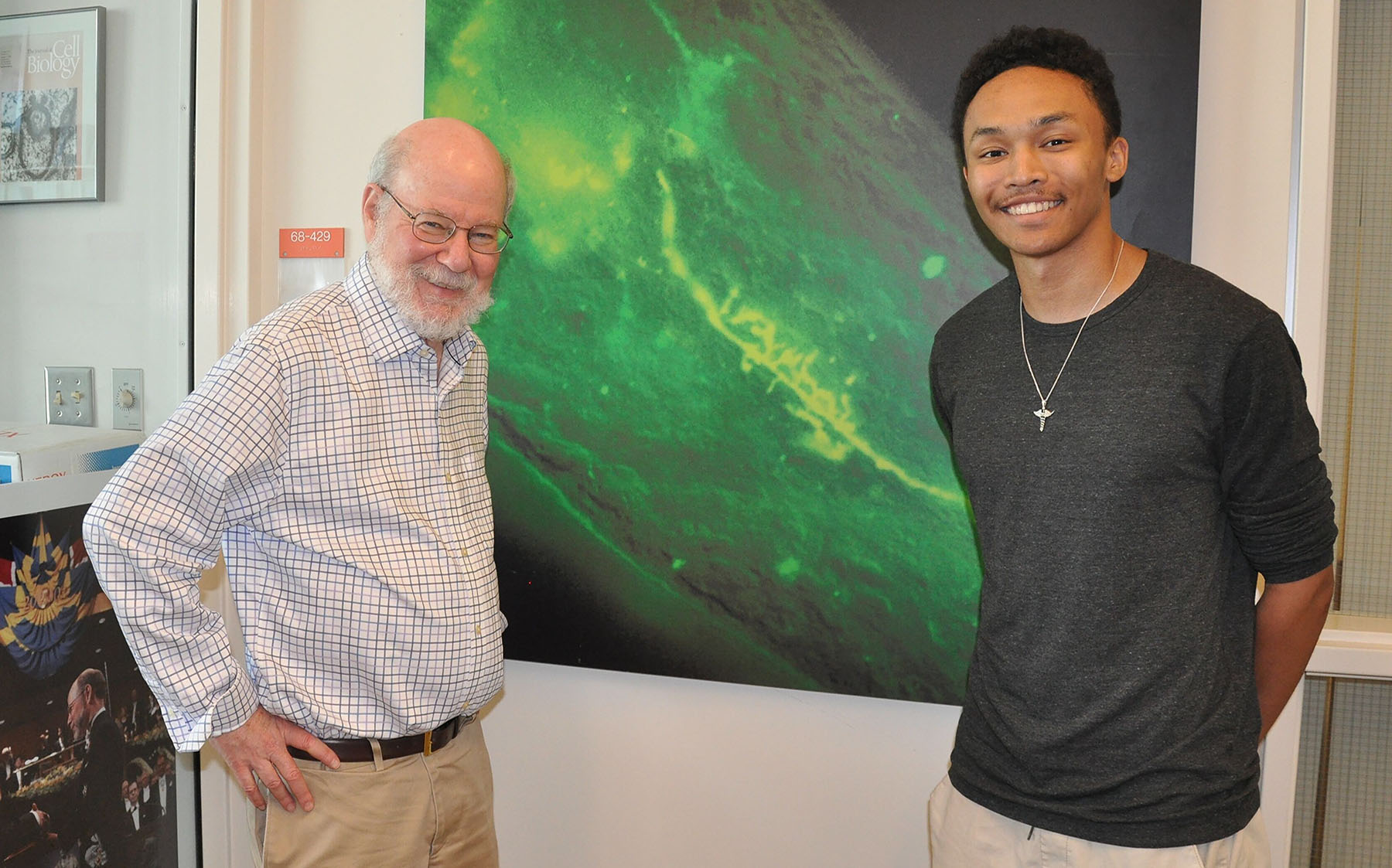 What motivates you to conduct research on neurodegenerative diseases and learning disabilities?

I’m motivated by my family’s support and the thought of millions of people with Alzheimer’s disease and learning disabilities who have certain aspects of their lives taken from them. My grandfather has Alzheimer’s and it is one of the only diseases where doctors can’t really cure or slow its progression. When I become a doctor, I don’t want to feel helpless watching my patients slowly become more and more impaired. I can’t help but think that if I could figure out a way to fix learning disabilities as well, then people like my uncle could live exactly the life they would want.

What are your goals for the future?

I am working towards getting a medical degree and a Ph.D. so I can work in a school and have a lab where I teach graduate and undergraduate students about neurological diseases. I plan to do my residency in neurology and become an academic physician where I will work at an academic institution. I would work at the hospital a few weeks out of the year and then the rest of the time I will be teaching and/or doing research. In the meantime, I want to finish the original project that I presented at NCUR and get it published. Then I will be transitioning into my new role as senior researcher in Dr. Hudson’s lab where I will help new students find the tools necessary to take ownership of their projects and make their own impact on the lab. In addition, I will be project lead of my own project in the lab as well.

Why is undergraduate research important?

It is one thing to go to class and learn, but to be able to apply what you learned is a whole new level of knowledge. I went into the Hudson lab without any knowledge of biology and was able to learn a lot just by doing research. You gain a deeper understanding by applying what you’ve learned in the classroom in the laboratory. It also teaches you that not everything works in the lab and part of the process of becoming a great scientist is failing. For people who come into college without knowing what to do with their degree, research can give you a better understanding of exactly what options are available to you and potentially find your new passion.

The experience is beyond worth it, so GO DO RESEARCH!